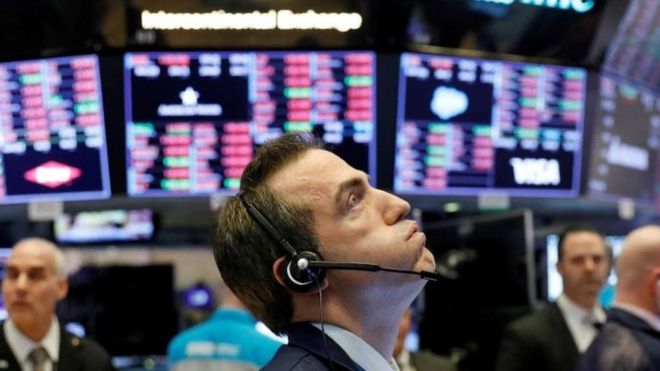 Big shifts in the stock market are often in the news, whether they are booms in the US or falls due to the coronavirus or the financial crisis.

As companies grow, they issue shares. The largest companies in the UK have shares which are bought and sold on the London Stock Exchange.

Their collective performance is often quoted amid a blizzard of numbers that may feel confusing and irrelevant. Rarely does anyone mention during a coffee with friends that the FTSE 100 has dropped well below 7,000 points.

But there are good reasons why this performance affects your life and finances.

‘I don’t invest’ – actually, you probably do

Many people’s initial reaction to “the markets” is that they are not directly affected, because they do not invest money.

Yet there are millions of people with a pension – either private or through work – who will see their savings (in what is known as a defined contribution pension) invested by pension schemes. The value of their savings pot is influenced by the performance of these investments.

Pension savers mostly let experts choose where to invest this money to help it grow. Widespread falls in share prices are likely to be bad news for pension savers.

As much as £600bn is held in defined contribution pensions at the moment.

This is what has happened in the last year to the FTSE 100 – pronounced “Footsie” – which monitors the performance of the top 100 companies listed on the London Stock Exchange.

So big rises or falls can affect your pension, but the advice is to remember that pension savings, like any investments, are usually a long-term bet.

“There’s a huge difference between knowing you’re connected to the stock market and panicking about it,” says Sarah Coles, from investment platform Hargreaves Lansdown.

“Stock markets always go up and down over the short term, and while we’re seeing particularly large movements right now, it’s important to bear in mind that investors have lived through major ups and downs in the past and come out the other side.”

No, some people have a pension which promises a specific value, depending on their salary. Others have no pension at all.

About 10 million people have been automatically enrolled into a pension and may have not really noticed.

This scheme sees employers divert wages into a pension and contribute some money themselves. The government adds a little in tax relief.

In every case, the value of these pension savings is affected by investment performance. So “the markets” matter – maybe not as much as everyday wages, but for future pensions.

What about people retiring or retired?

Timing is more critical for those at retirement age, as this may be when a retiree uses their pension pot to buy a retirement income, or annuity. The bigger the pot, the more income they will get in retirement.