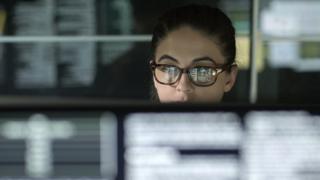 Stock markets in Europe have opened higher following Monday’s plunge, when shares saw the biggest falls since the 2008 financial crisis.

London’s FTSE 100 share index rose more than 2% after having sunk 7.7% in the previous session.

Markets were battered on Monday in reaction to the threat of an oil price war between Russia and Saudi Arabia.

But after falling as much as 30% on Monday, oil prices also saw some recovery, with Brent crude rising 4%.

The main share indexes in France and Germany were also up by more than 2% on Tuesday morning.

The response has been a fairly standard one when it comes to stock market behaviour, said Kathleen Brooks, director at Minerva Analysis.

“Markets are so emotional, it’s unbelievable,” she said. “Act first, think later. This was the same in 2008, you have these massive declines and then the market is on pause.”

She said she thought markets would recover eventually, as “if you look at long-term charts they always recover”.

However, in the short term, “we could see another decline if we don’t see the stimulus that’s required. We need to hear more positive things because that’s when stock markets go up.”

On Monday, US President Donald Trump said he would be taking “major” steps to strengthen the US economy against the impact of the coronavirus outbreak, and analysts said this had helped to lift markets.

The rebound has also been helped by a slowdown in reported cases of coronavirus in China, according to Michael Hewson, chief market analyst at CMC Markets UK.

“This optimism, along with expectations around further central bank actions is, for now, offsetting the news that the whole of Italy has gone into lockdown and the Spanish government has taken the decision to close all schools and universities in Madrid,” he said.

Some investors will think that yesterday’s panic was an over-reaction, and that some shares now look cheap.

That would explain the rise this morning of Tui, the holiday company, and the small gains shown by Royal Dutch Shell and BP. The seesaw pattern of trading is nothing new.

One of the curious features of bear markets, where prices fall more than 20% from their peak, is that they normally contain several one-day rallies within the overall fall.

That has been a feature of US and UK bear markets since the crash of 1929, and has already been part of the pattern of trading since the coronavirus struck.

Today’s rally could easily be followed by another fall.